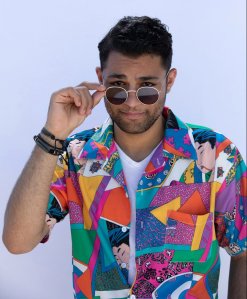 Sameh Marey is a musician, guitarist, and singer-songwriter going by the name NOVA. He is originally from Egypt, but is now in Los Angeles pursuing his dreams of stardom. NOVA developed a deep connection with music at a very young age. He began writing his own songs and melodies as a child without even owning an instrument. Once he was confident with his abilities as a songwriter, NOVA mustered the courage to ask his parents for a guitar, and while at the time they didn’t necessarily believe there was a future in music, they agreed to purchase NOVA his first acoustic guitar.

NOVA and his guitar became inseparable as he continued to evolve as a musician. It wasn’t until graduating college with a film degree that NOVA realized nothing in life makes him happier than playing music. It was then that he had to face his next big challenge: Telling his parents he was leaving for the United States to chase a music career.

A Long Beach couple is fighting against the installation of a small cell tower outside their house, but city officials say it’s out of their hands.

The homeowners say the telecommunications industry has made it impossible for them to prevent it.

A group of about 60 people gathered in Lancaster to protest against the use of force after cellphone video captured a deputy holding a gun to the head of a man as he lay prone on the ground during an arrest.

Protestors say they want the Los Angeles County Sheriff's Department to modify the way deputies interact with the community and ask that those who violate the department policy be held accountable.

A mom who missed out on the first month of her baby’s life while battling COVID-19 in a Santa Monica hospital says this Mother’s Day will be extra special.

Natahlie Herrera was 37 weeks pregnant with her son, Felipe, when she and several other members of her family tested positive for the virus. Her condition rapidly deteriorated and she delivered the baby via cesarean section to avoid exposure, and he was taken away before she could hold him.

More than 800 turtles rescued from storm drains along Jersey Shore