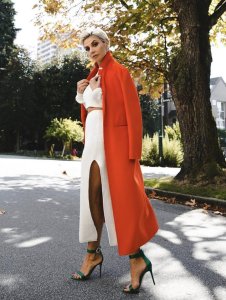 Zara Alexandrova is a stylist and fashion consultant. She was born in Armenia and grew up in Russia. Since childhood, Zara always had an eye for fashion. She loved putting together outfits for school, and was even known to alter her mother’s wardrobe. Zara saw fashion as a means to be “the woman that she wanted to be.” Growing up in Russia, however, pursuing a career in fashion was out of the question, so Zara went to school to be a lawyer.

When her family decided to move to Los Angeles, a place that embraces big dreams, Zara jumped at the opportunity to explore the fashion world professionally. She began working at boutiques on Rodeo Drive, and it wasn’t long before her sense of style got her noticed. It wasn’t long before Zara was welcomed with open arms into the world she knew she was always meant to be a part of.

Binx is a pop artist originally from South Africa. She grew up in small towns without a lot of venues for entertainment, so people became the entertainment, and Binx found out early on that she loved being in the spotlight. She loved performing for friends and family, and after seeing Britney Spears on television, Binx suddenly knew exactly what she wanted to do with her life. With the love and support of her family, Binx grinded away at pursuing her dreams of being a famous pop star and was eventually able to make her way to New York City.

She was dubbed "The African Bee" because of her South African roots and the elaborate bee costumes she wears during performances. Binx was gaining a lot of traction in New York City, but when L.A. began offering opportunities, she would have to decide whether to leave everything she’d built in New York to start all over on the West Coast. Making things harder yet, Binx experienced an unexpected tragedy that made her question whether she would continue with music at all.

Manny Garcia is an educator, creative, and clothing designer. He was born in Texas and raised primarily in Michigan. Manny grew up surrounded by music, which ignited his creativity, but despite that passion, he pursued teaching. After his ambitions outgrew Michigan, his desire to give music a shot was too strong to ignore, so he moved to Nashville. As a Mexican-American wanting to explore his cultural identity, Nashville proved to…

Asha Dahya is a journalist, a Ted X speaker, host, and author. She was born in England, but spent most of her childhood in Australia. Since a young age, Asha has always been talkative and loved performing. She had aspirations to be an actress, but later found that path was not a good fit. Asha began working as a television host, and suddenly found herself working for some major networks. Once she felt established, she wanted to explore new challenges and opportunities outside Australia, which brought her to Hollywood.

The move proved to be difficult, and Asha may have underestimated the challenges she would face in Los Angeles. Down on her luck, Asha longed for a supportive community that she didn’t have here in the U.S. She started the blog GirlTalkHQ as a place for like-minded women to share their stories. Little did Asha know, her media savvy and desire to speak her truth would lead Asha down a new path that would open doors she never expected.

Mother, grandmother of missing Tennessee toddler are being held at the same jail