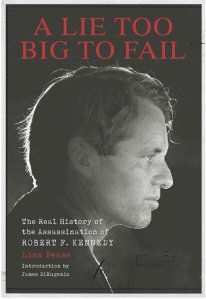 Lisa Pease is the author of A Lie Too Big to Fail: The Real History of the Assassination of Robert F. Kennedy. In the heavily researched book, Lisa lays out how witnesses with evidence of conspiracy were silenced by the LAPD; how evidence was deliberately altered and, in some instances, destroyed; and how the justice system and the media failed to present the truth of the case to the public.

Lisa joins the podcast to discuss her book. She explains why she believes Sirhan Sirhan was not the one who killed RFK, who she believes planned the assassination, and the reasons behind why Robert F. Kennedy was deemed such a threat that he was  targeted.

Aaron Nolan is co-anchor KARK 4 Today in Little Rock, Arkansas and anchor of Newsfeed Now, a daily digital newscast that has recently focused on the coronavirus pandemic. Aaorn joins Jason and Bobby to discuss what it's like as a journalist covering COVID-19, and how he is peeling back the layers of such an ongoing global story. Aaron also explains the differences between anchoring the digital Newsfeed Now Coronavirus: 'Facts Not Fear' program and a traditional television broadcast. Jason and Aaron also take some time to share about their Arkansan roots.

Sarah Carey is the editorial food director at Martha Stewart Living and the host of Everyday Food with Sarah Carey. She joins Jason and Bobby via Skype from upstate New York. Sarah shares show she discovered her passion for food and cooking after initially considering a career in photography. She reveals how she ended up working with Martha Stewart, and why her job still excites her after more than 20 years. As people find themselves spending more time in the kitchen amid COVID-19, Sarah shares tips and advice for those who may be starting to cook for the first time.

Chris Gialanella is the Los Angeles and Orange County group publisher for Modern Luxury Magazine, which includes publications like Angeleno Magazine, Riviera Magazine, Interiors, and more. Chris shares how the COVID-19 has affected the world of magazine publishing, and how people are reading more magazines now than ever. He also reveals details about Modern Luxury's new singular, special-edition "Hope Issue." Chris also shares how he found his passion for the publishing business after originally wanting to pursue a career in law & politics.

‘Please don’t come up here to party’: Authorities crack down on underground parties in Hollywood Hills

New COVID-19 testing site at Dodger Stadium to test up to 6,000 people a day

‘Please don’t come up here to party’: Authorities crack down on underground parties in Hollywood Hills

New COVID-19 testing site at Dodger Stadium to test up to 6,000 people a day