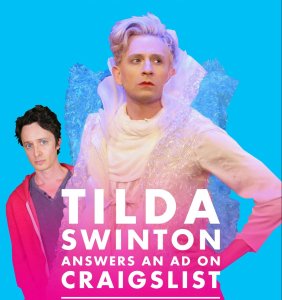 Byron Lane is a former news writer and producer, and currently stars in the critically-acclaimed play he wrote titled Tilda Swinton Answers an Ad on Craigslist. Byron also wrote, produced, directed, and stars in the award-winning web series Last Will and Testicle, which was inspired by his own experience with testicular cancer. He also wrote and produced the feature film comedy Herpes Boy, which he also stars in alongside Academy Award winner Octavia Spencer.

Byron stops by the News Director’s Office and shares how he went from a news writer, to writing creatively. He talks about his inspiration for his play about Tilda Swinton, opens up about his time working as the assistant for the late Carrie Fisher, and more.

“The road to Hell is paved with adverbs.”

Ryan Faughnder is a film business reporter for the Los Angeles Times. In this episode, Ryan joins us to talk about some of the struggles the film industry has had during the coronavirus pandemic. He shares his thoughts on some of the solutions the major studios have implemented to weather the storm, including their use of streaming services. Ryan also tells us about the L.A. Times' new newsletter, "The Wide Shot."

Today on the podcast, we're counting down the most downloaded episodes of the year! First, KTLA tech reporter Rich DeMuro talks about the challenges of having to suddenly work from home, and shares some helpful tips. KTLA general manager Janene Drafs started her new job in Los Angeles at the beginning of the relentless year, and joined the podcast to share her insight on leading a news station during these times. Motivational speaker and author Mel Robbins joins us to talk about the power of failure, and KTLA reporter Wendy Burch opens up about her relationship with her son Brady. Finally, Perry Sook, President &amp; CEO of Nexstar, gave a candid interview about the state of the company amidst the global pandemic.

On this Christmas Eve, we're looking back at some conversations with some of our KTLA family who have moved on to brighter things! CBS News correspondent David Begnaud shares compelling accounts from his reporting at on major events such as Occupy L.A. and his award-winning coverage of Hurricane Maria in Puerto Rico. Dave Malkoff, now at The Weather Channel, tells us about his reporting from Iraq at the end of Operation Iraqi Freedom. Elizabeth Espinosa, the executive director of communication for the Los Angeles County Sheriff’s department, opens up about her special relationship with her brother. Long time KTLA photographer Gary Reyes looks back at his storied career, and shares what he is looking forward to in retirement.