Skip to content
Breaking News
Breaking News
Watch live: Obama speaks on death of George Floyd, policing and protests in virtual town hall
Live Now
Live Now
5 Live
This is an archived article and the information in the article may be outdated. Please look at the time stamp on the story to see when it was last updated. 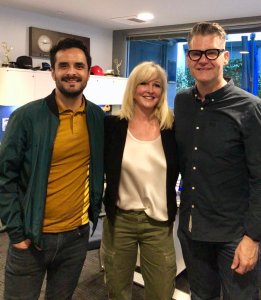 On this episode of the podcast, Jason chats with Executive Producer of Dr. Phil, The Doctors, and Daily Mail TV Carla Pennington. Carla and Jason talk about the trajectory of her career and how she manages overseeing all aspects of production for the three successful television programs. Carla also opens up about raising kids in a 24 hour business and recalls some of the memorable stories from throughout her career.

The World Adventures of Chris Wolfe | The News Director’s Office

You know Chris Wolfe as the gregarious reporter from KTLA, but did you also know he's basically Indiana Jones? On this episode, Chris tells us all about his childhood in Singapore, trekking through the Himalayas in Nepal, and crawling up a pyramid in Cairo. He also talks about some of the big stories he's covered, such as the Michael Jackson trial and Hurricane Katrina. Chris also reveals the event that made him want to become a journalist.

Aaron Nolan is co-anchor KARK 4 Today in Little Rock, Arkansas and anchor of Newsfeed Now, a daily digital newscast that has recently focused on the coronavirus pandemic. Aaorn joins Jason and Bobby to discuss what it's like as a journalist covering COVID-19, and how he is peeling back the layers of such an ongoing global story. Aaron also explains the differences between anchoring the digital Newsfeed Now Coronavirus: 'Facts Not Fear' program and a traditional television broadcast. Jason and Aaron also take some time to share about their Arkansan roots.

Sarah Carey is the editorial food director at Martha Stewart Living and the host of Everyday Food with Sarah Carey. She joins Jason and Bobby via Skype from upstate New York. Sarah shares show she discovered her passion for food and cooking after initially considering a career in photography. She reveals how she ended up working with Martha Stewart, and why her job still excites her after more than 20 years. As people find themselves spending more time in the kitchen amid COVID-19, Sarah shares tips and advice for those who may be starting to cook for the first time.