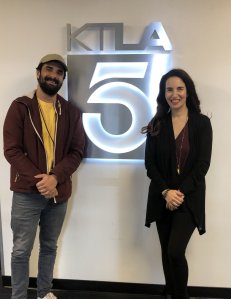 Vida Ghaffari is an actress originally from the Washington, D.C. area. Her father was a scientist and her mother, an artist and art teacher. Vida is of Iranian descent and grew up during a time where anti-Iranian sentiment was prevalent in the United States. She was bullied in school, and therefore felt most comfortable on the stage exploring different characters. As an adult, Vida would land in the journalism field, and that would ultimately take her from D.C. to Los Angeles working in Persian TV.

The television journalism opportunities led to some voice over work, but Vida was still drawn to performing. As she sought more acting opportunities, she began to notice the types of roles she was booking: Hijab Woman #1…Muslim Lady #3. Those roles were often diminutive, silent, and racist. Vida would be challenged, not as an artist, but as an Iranian-American wishing to explore characters with more depth in an industry notorious for perpetuating stereotypes. Fortunately, Vida would eventually find what she’s been looking for in a way that has brought everything full-circle.

Authorities searched the home of rocker Marilyn Manson on Monday after allegations of physical and sexual abuse by several women.

Los Angeles County sheriff's Deputy Eva Jimenez said a search warrant was served on the home of Manson, whose legal name is Brian Hugh Warner. She would give no further details.

The holidays bring joy and merriment, but they can also be stressful. Find out what naughty things top the list that make people scream "Bah Humbug!"

Also, a self-proclaimed elegance coach is now making YouTube videos to teach you how to be classy. Buckle up.

An attorney hired by City Atty. Mike Feuer’s office has agreed to plead guilty to one count of bribery in a nearly $2.2-million kickback scheme arising from the Los Angeles Department of Water and Power’s 2013 billing fiasco, prosecutors said Monday.

Jackpot: SuperLotto Plus ticket worth $38 million sold in Santa Clarita

FedEx driver questioned after 300 to 400 packages 'thrown off ravine': Sheriff

L.A. businesses can now be cited for not verifying COVID vaccine proof