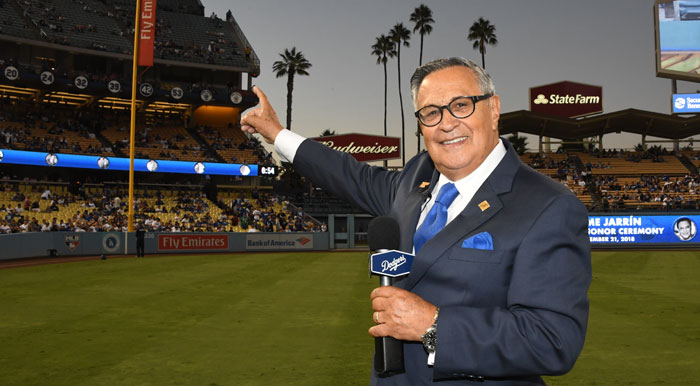 Jaime Jarrín, “the Spanish Voice of the Dodgers” and one of the most recognizable voices in all of sports broadcasting, has been calling Dodger games since 1959, this is his 61st season with the club. Last season, the Hall of Famer became just the 12th Dodger to be added to the club’s Ring of Honor, joining other franchise icons in having his name permanently affixed to Dodger Stadium. Jarrín has called three perfect games (Sandy Koufax in 1965, Tom Browning in 1988 and Dennis Martinez in 1991) and 22 no-hitters, 29 World Series and 30 all-Star games during his decorated career. In 1998, he was inducted into the National Baseball Hall of Fame in Cooperstown, NY as the recipient of the Ford C. Frick award and became only the second Spanish-language announcer to achieve that honor, joining Buck Canel. in the 2005 book “Voices of Summer,” Jarrín was named as baseball’s all-time best Spanish-language broadcaster. From 1962-84, Jarrín called nearly 4,000 games – spanning 22 seasons – without missing a contest, before the streak was broken in 1984, when he took charge of all the Spanish-language radio coverage and production for the Los Angeles Olympic Games.  On august 23, 2009, Jarrín once again made history and served as the play-by-play announcer in the first-ever regular season, dedicated, Spanish-language telecast of a Dodger game. He has called more than 30 world championship boxing title bouts for radio and TV stations in Latin America including “The Thrilla in Manila” between Muhammad Ali and Joe Frazier. Jarrín received a star on the Hollywood Walk of Fame – dedicated in September 1998 – and is a member of both the California Broadcasters’ Association Hall of Fame and the Southern California Sports Broadcasters’ Association, which awarded him the organization’s Vin Scully Lifetime Achievement Asward in 2019.

No arrests were made after a student fight broke out and caused "mass panic" during a football game at Montclair High School Friday night, officials said.

A disturbance was reported at about 8:57 p.m. at the Montclair High School football field during a game attended by 1,500 people, the Montclair Police Department said in a news release Saturday.

The fence around the Capitol is back up. The District of Columbia's police department is at the ready. The U.S. Capitol Police have requested assistance from nearby law enforcement agencies including the National Guard.

The Capitol Police have taken no chances for Saturday's rally at the Capitol in support of rioters imprisoned after the violent Jan. 6 insurrection. They're working to avoid a repeat of the pre-inauguration attack.

Martin Diky said he panicked as a huge wildfire started racing down a slope toward his wooden house near Lake Tahoe.

The contractor had enough time to do some quick research and decided to wrap his mountain home with an aluminum protective covering. The material that can withstand intensive heat for short periods resembles tin foil from the kitchen drawer but is modeled after the tent-like shelters that wildland firefighters use as a last resort to protect themselves when trapped by flames.

Fearful U.S. residents left behind in Afghanistan hiding out from Taliban

Woman dies after car plunges off parking structure in Orange