After a three-week long dry period, a storm system moving into Southern California could bring moderate to heavy rain to the region by Sunday, according to the National Weather Service.

Forecasters predicted the storm has the capability to create brief heavy rain and thunderstorms with the potential to flood roadways and lead to mud and debris flows in recent burn areas.

Current estimates indicate a range of 0.75 to 1.50 inches across much of the area, with local amounts of up to 3 inches possible in southwest facing foothills and mountains, the weather service said on its website.

While heavier rain wasn't expected to hit until Sunday, the region could see some light rainfall on Saturday night.

The system was also expected to bring snow to higher mountain elevations, but the levels could drop rapidly to 3,000 feet on Sunday night. At that point, snow showers and strong winds were possible across Interstate 5 near the Grapevine, forecasters said.

Strong, potentially damaging winds were also expected into Monday, with gusts of over 60 mph possible in mountain and desert areas. Downed trees and power lines were a "significant concern" associated with the system, according to the weather service.

While Southern California braced for some much-needed rain, coastal areas in Ventura and Los Angeles counties remained under a high surf advisory as forecasters predicted a long period west-northwest swell would persist through Saturday afternoon.

Surf would gradually subside during the day, thought it was expected to remain elevated at many west-facing beaches in the region.

Sunday's potentially strong system could cause very choppy sea and surf conditions through Monday. Additionally, thunderstorms over coastal waters have the capability to produce strong winds gusts and even waterspouts.

Forecasters also warned of dangerous rip currents during the extended period of high surf, and have urged inexperienced swimmers and surfers to stay out of the water. 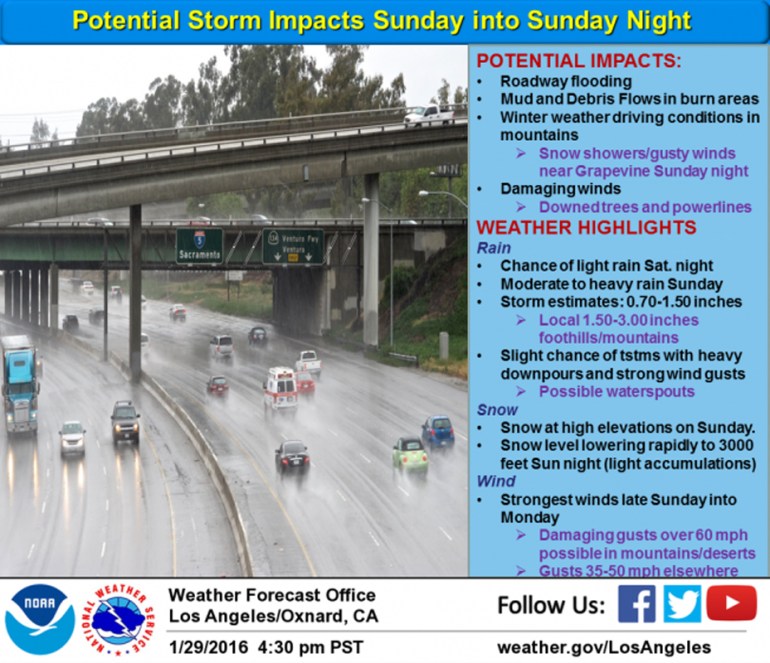 Wednesday forecast: Average highs before temperatures climb over the weekend

Look for average temperatures Wednesday before highs warm up heading into the weekend. Henry DiCarlo has KTLA’s forecast on July 8, 2020.

Look for cooler temperatures through Thursday, but highs climb again as we head into the weekend. Henry DiCarlo has KTLA’s forecast on July 7, 2020.

Look for hot temperatures across the Southland Monday before cooler weather returns midweek. Kirk Hawkins reports for the KTLA 5 Morning News on July 6, 2020.